In the world of medicines with harmful side effects, genetically modified food, chemically treated drinks, busy lifestyle, electronic distractions and unpredictable environment, it is a challenge for parents to help kids become strong and sharp. Swarna Prashana is a natural remedy which is time tested, is being practiced for 1000’s of years by our ancestors  and that builds overall health and intelligence naturally without causing any harmful side effects. Learn more about, what is Swarna Prashana? Or Find the Ayurveda camp nearby here. 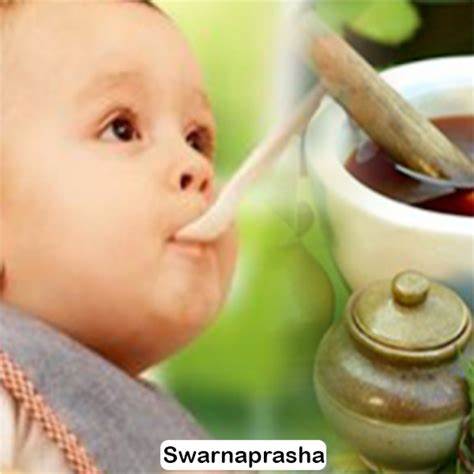 Swarna prashana which has been explained in the classical texts of Ayurveda is an activity carried out for enhancing the growth and development in young children. Gold or Swarna is considered as a one of those metals which have good benefits on the body when consumed internally. The knowledge & uses of Swarna Prashana is extensively explained in the texts of Ayurveda.

Ayurveda is the perfect science or knowledge of life. It is derived from two words – “Ayush” meaning Life and “Veda” meaning knowledge. Ayurveda is as old as the existence of species over the planet earth. It is the most fascinating science, which basically teaches us how to lead a healthy, happy and comfortable life. A follower of Ayurveda is less likely to fall ill. Ayurveda emphasizes that – Prevention is better than cure.

The knowledge of Ayurveda was passed orally through a lineage of sages in India. Eventually, this knowledge was collated into texts more than five thousand years ago in its present form by some of the great sages like Maharishi Atreya, Maharshi Kashyap, Acharya Charaka, Acharya Vaghbata etc. The oldest known texts on Ayurveda are the Charaka Samhita, Sushruta Samhita, Ashtanga Hrudaya, Kashyapa Samhita etc.

When to take Swarna Prashan?

Swarna Prashan is therefore recommended to be taken immediately after birth and continued till the age of 16 years. Swarna Prashana (Suvarna Prashana) is made using swarna bhasma (gold ash) mixed with honey and cow ghee containing herbal extracts like vacha, brahmi, shankupushpi,all of which show strong immune boosting properties.